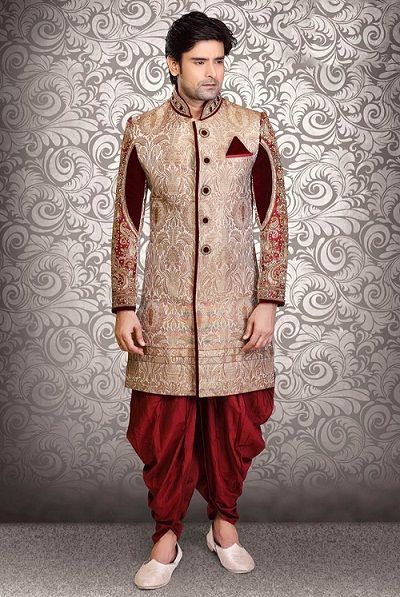 All You Need To Know About the Indian Dhoti

The Indian dhoti is popularly known as the “one piece wonder”. Known by different names in different regions, dhoti is a traditional garment worn by men in India. Usually, the dhoti is about 5 yards long and is rectangular in shape and is wrapped around the waist and the legs. The ends are then knotted near the waist.

The Indian dhoti is a very traditional drapery that bears the signature of the Indian culture and tradition. The unstitched cloth of 5 yards provides the man with an elegant appearance that is quite inherent to the culture he follows. This is also considered to be the best alternative to the regular kurta pajama men usually wear.

Dhoti is not only a traditional wear, but men often wear this during the festive times as an ethnic wear. This is worn by a number of politicians in the southern states and this has also made a political statement as they speak a different story altogether.

Even in an era where western clothing has taken over traditional Indian clothing, dhoti is still a traditional wear during weddings. The Indian dhoti still enjoys its eminent status as it is the most preferred ethnic wear by many men.

There are various styles men can follow while wearing the dhoti. One of the most popular styles is the Bengali style where there are pleats included when wearing the same. The Indian dhoti gets an entire traditional make-over in southern India where it is worn along with the angavastram and is just draped around the waist. In a number of Indian communities, wearing a dhoti kurta is said to be mandatory.

The Indian dhoti is also the costume of a number of national icons. The prominent Indian citizen who has popularized this attire beyond the Indian Territory is Mahatma Gandhi.

The Indian Dhoti is not only a part of our culture, customs and religions but it reflects the true impression of Indianness.