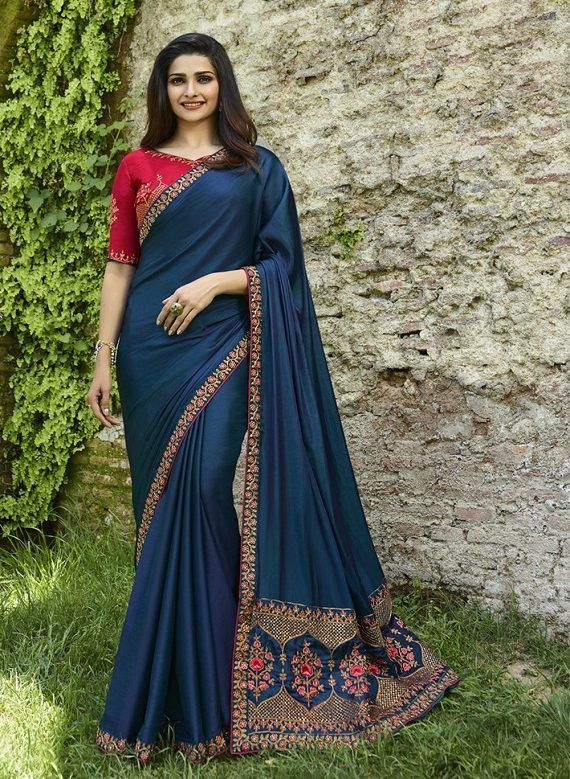 Bollywood Saree Looks that Have Tugged on the Heartstrings of Many

Bollywood has inspired a lot many styles, from men’s fashion to women flaunting outfits that can make headlines. Inspired by the Bollywood movies, women everywhere have found ways to recreate the looks  flaunted by the divas in Bollywood by themselves. Saree, as an outfit, has become an ensemble that resonated not only with Indians but also with people all over the world. A number of Hollywood beauties too have sported the saree in the past, making the outfit even more popular.

Here are some of the most memorable look flaunted by Bollywood actresses in movies and more:

The heartthrob of many, Deepika Padukone has vowed her audience with not only her acting and her graceful beauty but also her attire in all of her movies. With a south Indian look in Chennai Express where she dons on the traditional southern attire of India, she looked every bit stunning even as the song sequence played in the back. Another look that stayed with the audience even long after the movie ended was her look as the stunning ‘Shanti Priya’ in Om Shanti Om where she brought back the styles of the past in a glamorous way! And if that wasn’t enough, her beautiful look while dancing to ‘pinga’ with Priyanka Chopra brings back to mind an equally wonderful look.

With Akshay Kumar romancing Katrina Kaif to ‘Teri Or’ in ‘Singh is King’ as she has a lovely black saree draped about her, one would certainly her look in the saree more than all her other look throughout the movie.

One of the reasons we remember the character of Chandni in the movie ‘Main Hoon Na’ so well is because of the delightful Sushmita Sen flaunting the saree and the wind blows through her hair, pulling the pallu back and making her look as the beauty queen she truly is. Her saree look throughout the movie made the outfit so very popular when the movie came out and has stayed alive in our minds to this very day.

Another Bollywood diva who made saree styles popular is Kareena Kapoor Khan while she moved her hips to Chammak Challo in the movie ‘Ra.One’. Dressed in a lovely red number, she had every eye on her while the song was being played, owing to the grace the ensemble exuded.

A prominent name and fashion icon not only in Bollywood but Hollywood now as well, Priyanka Chopra’s saree in Dostana while she wooed hearts and tugged at heartstrings dancing to Desi Girl has been something of a dream. More remember the lovely way her pallu was draped than the actual lyrics of the song and all for good reason. The number of girls inspired by that look has been thousands where each have tried out that particular draping style at least once in their lifetime.

Bajirao Mastani is another movie where she held the hearts of her audience in her grip. With the traditional Maharashtrian style of draping sarees, she made everyone a fan not only of her acting but the outfits as well.

Raveena Tandon made the nation go crazy with her sensual dance in ‘Tip Tip Barsa Paani’ from the movie ‘Mohra’. But what caught everyone’s attention equally was the lovely blouse style she flaunted. The frilled sleeves are as engraved in the minds of fashionistas as her look in the song and her beauty.

An epitome of perennial beauty, Rekha has forever reigned the hearts of men and the fashionista minds of women by wowing people with her beauty, her sense of style and her grace. Every appearance she has made with her lovely sarees on oozes oodles of grace, making her an enigma among all fashion lovers. All of appearances at the Bollywood award shows have been the talk of the town for the amazing way she manages to strut draped in those nine yards and for ability to look as gorgeous every single time.

Aishwarya Rai Bachhan has been another gorgeous lady who has bewitched minds dressed in some of the most gorgeous sarees. Draped in a simple yet fashionable way, her look in the movie ‘Devdas’ where her sarees caught everyone’s eye as much as her beauty made for a style statement on its own. What’s more is her draped in a Bengali style saree for ‘Dola re Dola’ that made everyone groove to the song after Aishwarya and the dancing queen, Madhuri Dixit, flaunted the look with elan.

Another look that Aishwarya has inspired is the one she sported back in ‘Hum Dil de Chuke Sanam’ where she made her audience swoon over her.

The demand for Bollywood inspired sarees have certainly increased with more and more people being wooed by the lovely divas on-screen flaunting the attire in flattering ways. And looking at the craze of these outfits, designers have definitely done their bit in bringing the look to the common folk in prices more reasonable and acceptable to them.

Where to Find these Glamorous Bollywood Sarees?

While you can find these sarees with a number of designers, finding something within your budget and range is only possible when you shop for them online. Nihal Fashions is an online shopping portal that has the best of options to choose from among a range of Bollywood sarees. You can take your pick by browsing through the entire collection and have your choices delivered to your doorstep!

From the right shade to the fabric you love best, you can find a wide range of Bollywood sarees that are each a delight to own and flaunt.

If your love for the Bollywood divas and their saree flaunting ways has transcended beyond just watching them onscreen, find your choice of Bollywood saree online to make your own fan following by taking inspiration from the movies you have grown up watching!